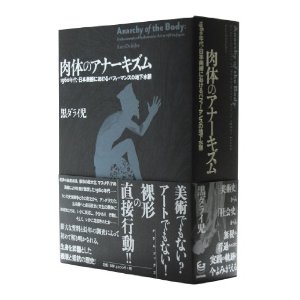 The history of Japanese art of the 1960s has often been introduced in exhibitions and
discussed, due to bold experiments carried out by the artists and the dynamic evolution of art from
Informel painting to Anti-art, followed by technology art, Mono-ha and conceptual art. However,
the exhibitions and writings on the history of this period have typically ignored the performances of
visual artists, except those by Gutai Bijutsu Kyokai [Gutai Art Association] and Hi-Red Center.
In fact, many other artists also ventured out of the context of ‘art’ to do performances in public
spaces throughout the 1960s, which represented the anti-institutional culture of the time more than
any other works and performances already recorded in history as the mainstream of the
‘contemporary’ art.
This book examines performances of obscure artists in order to place them in the cultural
and political history of the anarchist tendencies of that epoque, which also manifested themselves
in the contemporary counter-culture and political activism. These performances took place in the
context of the Anpo Struggle (Movement against Japan-US Security Treaty) in the early 60s, and
Zenkyoto (All-Student Joint Struggle Conference) movements in the late 60s, as the artists took
part in the protests against the contemporary social ideals and rapid modernization.

The book is divided into four sections. In Section 1, we examine the significance of the
history of performance arts in Japan, demonstrating why it has been neglected in art historical
research that relied on the fabricated mainstream and remaining works while admiring ‘high’ art in
‘international’ style. The performance art discussed here was actually an inevitable result of
‘Anti-art’ shown at the Yomiuri Independent Exhibitions in early 60s. To transcend a premature
end of the 1964 debates on ‘Anti-art’ which were confined to an ‘art world’ that overly referred to
foreign trends, we need to expand the concept of ‘Anti-art’ to reflect the secularity of everyday
reality caught in the old-fashioned life style, while also taking the new phenomena into
consideration— the spread of urbanization and omnipresence of the mass media.

In Section 2, we chronologically retrace the history of Japanese performance art from 1957
to 1970, as viewed from this new perspective. Performance art started as a public demonstration
of action painting popularized by Georges Mathieu in 1957, which stimulated Shinohara Ushio to
start presentations of artist’s personality in mass media. Around the same time, Kazakura Sho did
his first performance independent from painting as a challenge to theatrical conventions. This
move toward bodily presence and ‘direct action’ was accelerated by the suppressed energy and the
anarchist tendencies after the defeat of Anpo Movement in 1960.
After the Yomiuri Independent Exhibition was suspended in 1963, with Japan embarking
upon its phenomenal economical growth, performance art spread to regional cities and streets out
of the narrow art/gallery confines, as seen in the early experiments by Zero Jigen (Zero Dimention),
and shows such as Gifu Independent Exhibition in 1965, which led to creation of a network of
artists living in remote areas. Joint performance art shows started also in 1962-64.
In 1966- 68 when angura culture bloomed, more artists started performances on streets and
stages for popular audiences, both individually and collectively, such as Kurohata, Mizukami Jun,
Koyama Tetsuo, and Kokuin. In Kansai (Kobe, Osaka, and Kyoto), The Play was founded in
1967 with Mizukami and Ikemizu Keiichi et al., as a group for collective projects. In 1968-69, The
Play combined the spontaneous/simultaneous performances of individuals with the organized,
collective performances of groups.
When the countdown for the opening of Expo ‘70 started, many of the avant-garde artists as
well as architects, designers, and musicians were invited to contribute to this national event,
following the spread of ‘inter-media’ events after mid-1960s. As a response, the ‘ritual’
performance artists succeeding the Anti-art tendencies formed Banpaku Hakai Kyoto-ha [Expo’70
Destruction Joint-Struggle Group] in early 1969, aiming to ‘smash’ the Expo’70 by organizing
events protesting against the societal brainwashing that advocated economic and technological
progress and was promulgated by the government and big enterprises. However, after the leading
members were arrested under the massive police crackdown on activists and hippies in the streets,
the group self-dissolved, and its members headed off in various directions.

Finally, in Section 4, we delineate the cultural, social, and political backgrounds of the
aforementioned numerous performances and evaluate the performances as the artists’ continuous
protest against the elite culture, economic and technological modernization, the increasingly
urbanized but also a more controlled society, and the conventional style of leftist movements, with
the adventurous spirit of ‘Anarchy of the Body’.